This Saturday, Sept. 28, Yonkers Racetrack holds the 24th edition of the New York Night of Champions. The $1.8-million program offers eight, $225,000 New York Sire Stakes (NYSS) finals for two-and three-year-olds of both sexes and gaits. In the mix are some Breeders Crown eligibles with a fine showing from a final the weight in the balance of going to the big show at Pocono in a few weeks.


In the two-year-old colt trot, Credit Fashion (BC-Credit Winner) is the lone eligible and a probable favorite. He has to battle multiple NYSS winner Flyhawk El Durado, who was in a dead heat for the win a week ag. We think the eligible will take it at a low payoff. 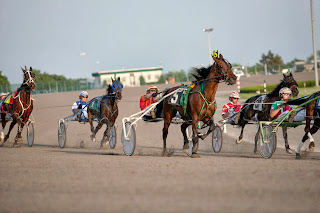 In the two-year-old filly trot final, a pair of Cash Hall products, Flyhawk Falina and Market Rally are the eligibles of eight going to post. But Maud Blue Chip could be the best here and rates the call, though another short price is guaranteed.
In the two-year-old filly pace there are six among the eight with tickets to Pocono. Sweetnsinful and  Supplemental Income, however, could take most of the win pool, so we can support Ali Blue (BC-American Idol), hopefully at a price better than the aforementioned pair.


After losing her first nine starts this season, Bouncing Bax (BC-Credit Winner) has come back to win four straight, while Royal Malinda (BC-RC Royalty) comes off a winning effort at Batavia to be our top two choices in reverse order.


The glamour-boy-trot final features a few familiar names. Four are eligible and we like Modest Prince (RC Royalty). He upset early this season and is more in his class among these state-breds. Non-eligible Tirade Hanover, a monster frosh that lost in a close final last year, comes here with four consecutive victories and could be part of the exotics.


The two-year-old colt pace features a definite favorite in the seven-for-seven sensation He’s Watching, who is coupled with Major Trick (BC-Art Major). Four other eligibles try to handle the Dave Menary-trained He’s Watching, now a world record-holder. No one connected to him expected the bargain-basement $3,000 yearling to turn into a pacing prince with 2013 earnings of $179,222 to date. Keying him to longshot eligible Twin B Speedo (BC-Art Major) could support a decent exacta but beware with the entry, the prices should be very low all around.


The soph-filly pace final offers defending champ Summertime Lea a chance to repeat, again at a short price. Social Scene (BC-American Ideal), the only eligible here,  set a track record for her division at Yonkers in mid-July and is our choice.


The glamour boy pacers finalize the program’s NYSS finals. This contest should come down to the sole pair of eligibles, Fool Me Once and defending champ Doctor Butch, both sons of Art Major. Fool Me Once is nine for 13 this season and “Butch” won the Art Rooney Pace at Yonkers in early June. With the most to gain, these two should wind up with top shares of the six-digit purse and make their ways to drop in the elims box at Pocono soon.

Posted by Frank Cotolo at 9:24 PM No comments:

Mature mares on the march


This Saturday, Sept. 21, Mohawk Racetrack gathers the top pacing mares for the $284,000 Milton Final. Eight of the 10 involved have “Crown” credentials and one of them is looking to put the bulk of this purse in her bankroll.


Monkey On My Wheel (BC-Mach Three) is once again peaking late in the season. She surprised the bunch of them in last week’s single elim, getting a beautiful pocket trip behind Voelz Hanover. And at 21-1, Krispy Apple (BC-Western Ideal) supplied the trifecta with a huge third element. 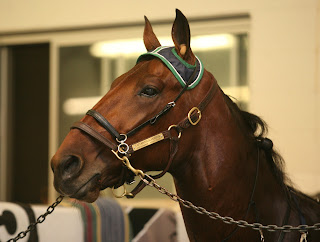 Rocklamation (BC-Rocknroll Hanover) had the strongest trip, coming from far behind, most of the time wide, from a post-8 launch, to be a few steps behind Krispy Apple (who was sucked along without any muscle moves) at the finish.


Rocklamation gets post 9 for the final but that puts her in a common spot, that is, in a position where she can close strongly at long odds, as she has done in the past, and win it. At the probable price and with the proven ability to close hard to win at high odds and off of her strenuous but productive elim, she becomes our choice.


Certainly the public will be on the side of Monkey On My Wheel and Voelz Hanover as Randy Waples will again make an attempt to steal the show from the top. Perhaps Anndrovette (BC-Riverboat King) will be a bit more aggressive and challenge with her speed, as well as Drop The Ball (BC-Western Terror) will be zooming (she comes straight to the final, adding an ingredient to the speed factor that was absent last week).


Krispy Apple may make for some traffic up front, trying to save ground and if she gets into the fiery fractions contest, three-quarters could produce the kind of smoke that Rocklamation could cut through even with a lot of real estate to make up late.

Posted by Frank Cotolo at 10:12 PM No comments:

This Saturday, Sept. 14, the glamour boy trotters converge in their first major tango of the fall racing season, the $686,000 Canadian Trotting Classic (CTC)  at Mohawk Racetrack.


Headlining the race into the eliminations was Hambletonian-winner Royalty For Life, who had triumphed over his fellow sophomore trotters in the past few stakes events after the August classic. The competition within the glamour boy division became enticing once Your So Vain trotted his way by Royalty For Life in an effortless 7-length recovery in a CTC elim.


To add onto the competitive nature in the CTC, a new glamour boy arrived to the trail. With an impressive first over bid to victory, Master Of Law was stamped as a favorite. The colt from the Frank Antonacci stable appeared onto the sophomore-trotting scene by winning the final of the Kentucky Sires Stakes at The Red Mile. Due to the impressive nature of his victory, driver Scott Zeron chose him over other elimination winner Your So Vain.


The CTC has two potential value contenders, both coming from the same elimination. Punxsutawney and Wheeling N Dealin have been rounding themselves back to their champion form in recent weeks.


Punxsutawney has gotten his stride together, with a foot issue as the culprit for his breaking. Since his score in the Colonial Consolation, he has been consistently hitting the board and showing a love for competition. His furious bid in his elimination can define his competitiveness, flying out of the pocket once he had room to just get nosed by Master Of Law at the wire. Punxsutawney draws well heading into the final and will be a major player towards the final quarter.


Wheeling N Dealin has not lived up to his standards he set as a freshman. He was expected to continue to be the champion he was at two but instead took some time to get himself together. It was with the addition of Lasix last week in the elimination that he showed one of his best efforts this year, tracking the cover of Master Of Law from the half-mile and coming into the stretch appearing slightly live. Wheeling N Dealin would be a better play in the exotics versus his value counterpart, who will be up for the top honors.

Posted by Frank Cotolo at 7:41 PM No comments:

Vernon Downs hosts a pair of exceptional $200,000-plus stakes fields on Friday, Sept. 6 with the Muscle Hill Trot for mares and the Credit Winner for males.

This is two group of hopefuls that have experience and resilience.

The Credit Winner cast is tough from inside post to outside post, presenting a myriad of scenarios, including a front-bias that would give any early foot a distinct advantage (and there is plenty of it here).

A big bargain here could be Mister Herbie, whose post and unpopularity will combine to bring his odds to overlay status. The Market Share fan club has been disappointed and Wishing Stone has once again shown his revenge to disloyal backers and Arch Madness shows signs like he is on the wane, with his best days behind him.

But Mister Herbie has still to peak as an elder statesman of this precociously global division. It would not surprise us if the crowd made him a fourth or fifth choice; in fact, it would thrill us.

The Muscle Hill is adorned with speedy matures:

Bound to attract a lot of money is Beatgoeson Hanoer, last year’s event winner and coming into this after a world-record win at Pocono (1:51.4). But that recent speed trip was a cover trip and it cannot be trusted as a raw number.

The entry of Maven and D’orsay is the serious threat here, though our particular focus goes on the latter. Coupled or not, this is the perfect place for D’orsey to storm to the top and take the field chasing her all the way. The 9 hole would have once again raised her odds to the height we caught her floating on Hambo day. As well, Maven may try to steal it from the top, so getting both of them with one wager is quite a bargain.

The others can all be considered one way or another. Check Me Out is here and so is Personal Style, both capable of taking advantage of a speed duel, as well as becoming involved in one. Making it tougher is Bax Of Life, always a longshot threat, Cedar Dove and Pembroke Heat Wave.

Posted by Frank Cotolo at 7:57 PM No comments: