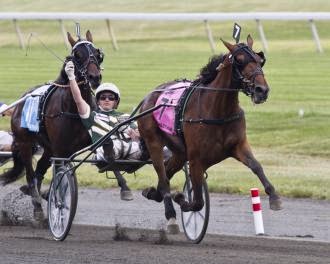 Friday, Aug. 29, and Saturday, Aug. 30, Mohawk offers the lucrative Grand Circuit Champlain stakes for freshmen and the Simcoe stakes for sophomores, including many “Crown” eligibles looking to increase their bankrolls, as well as we are looking for races to wager and increase our betting bankrolls. We will always lean on “Crown” eligibles in these fields. (e)after horse’s name represents eligibles

The beloved Designed To Be (e) meets five others in the $103.845 Simcoe for soph-filly trotters and will be a prohibitive choice. There is good cause to back Scream And Shout (e), another Jimmy Takter gal who is on the improve.

The $124,621 Champlain for frosh-colt trotters is next. The frosh nominees are aplenty in general and this field has seven of 10. Trainer Jonas Czernyson has been sending green ones out with success and here he has the Muscle Hill colt Aldebaran Eagle (e), who should get overlooked as Habitat (e) will take in way too much dough.

Another Champlain for the frosh-trot colts with the same purse goes next. French Laundry has been good for Takter but he is not a nominee. Wheels Ah Smokin (e) comes from the Chuck Sylvester barn. The Muscles Yankee kid is looking like Chuck is aiming big with him and he should be a weak (good to bet) second choice.

Friday’s stakes stop with the soph-filly trot Simcoe for $105,344. The money will pour in for Lifetime Pursuit (e) but we have our eye on Demanding Sam (e) who could topple the tote board with a good trip, especially if Takter’s other filly, Donatella Hanover (e) goes for her stable mate’s throat.

Saturday’s Metro Pace program (see TwinSpires blog), starts with a $207,689 Simcoe for soph-filly pacers. Last year’s frosh champ Uffizi Hanover (e) has been trying to pump up her soph credits and Precocious Beauty (e) has found some life in her stride recently but all in all this is a tightly knit bunch. An outside contender, Nat A Virgin (e), an Indiana-bred by speedy Always A Virgin, seems to have enough talent to take on this group, being too good any more for the Indy crowd.

The $218,076 Simcoe for glamour-boy trotters marks the return of Trixton (e). The Hambletonian winner that took full advantage of Father Patrick’s galloping display, will be a dead-on choice here but he could be ready for a smack in the ego if Il Sogno Dream continues to grow stronger. This is a good time to test Trixton with a colt outside of the Takter universe; this mile could result in some nifty profits.

Follow major BC hopefuls on their road to the November Breeders Crown at The Meadowlands with the Breeders Crown Countdown blog and the TwinSpires harness blog weekly, with archived reports on the results at the HambletonianSociety web site.

Posted by Frank Cotolo at 8:47 PM No comments: 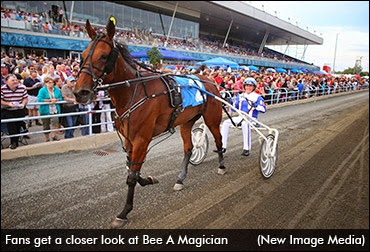 Other than the headline stakes in a week’s racing, eligibles for the “Crown”—some already Crown champs—will be active in top events such as Opens and Preferreds throughout the continent. We will scope the entry boxes for these, since they often wind up in such events while having a distinct class advantage not embraced by the betting public. As well, they may be the closest things to “locks” you can get.

This weekend a few trotters and pacers in this category are racing in low-profile events that deserve the bettor’s attention.

On Friday, Aug. 22, Bee A Magician (BAM, pictured) takes on the boys again, this time at Yonkers in a $44,000 Open Trot. Only one of those boys is a Crown male—and a veteran—Arch Madness. Five others, including the recognizable Coraggioso (non-eligible but remember supplements are possible) battle the duo. These three would be the top three contenders and it may be possible that BAM could be a decent price as a co-choice. Certainly Arch Madness is here to get some cash and well-needed rebound status en route to November.

Coraggioso may take some money from BAM, being a successful local and having recent form but in any order, the triptych holds all of the cards against the rest.

Also that night at Yonkers, Bouncing Bax is one of three Crown hopefuls (and the only mare) in a $32,000 Preferred Trot. She gets the rail, while Rossini and Sweet Justice leave from the 6 and 8 holes, respectively. We like Sweet Justice on the outside, where Yonkers bettors fear to tread. She is obviously aiming for a berth in the Crown show and has been sharp of late. From post 8 we may get a good price on him.

That same night at Pocono Downs, a $25,000 Fillies & Mares Preferred Handicap features another three stars heading for the Crown—Jerseylicious, Anndrovette and Rocklamation. Four others come along for the ride. Crown-champ Anndrovette is facing far less competition than she has while faltering her last few. She is still the probable public choice and most likely for that reason. Of these, Jerseylicious has the most to gain with a win and will offer the most to players.

Creatine and Its Complicated take on a Scioto Open field Aug. 22, where eight others appear firmly inferior. That may be a beautiful and easy and valuable low exacta – or better, a big one.

On Saturday, Aug. 23, Maven, Picture This and Sevruga head a field of eight ineligibles at Pocono in a Preferred Handicap worth $25,000. This is a perfect situation for Sevruga, especially since the name recognition of Maven will attract too many dollars. By and large, Sevruga is the strongest of this group, no less the three that are Crown-bound. Picture This needs marked improvement here but should be an exotic wagering consideration.

Follow major BC hopefuls on their road to the November Breeders Crown at Pocono Downs at the Breeders Crown Countdown blog and the TwinSpires harness blog weekly, with archived reports on the results at the Hambletonian Society web site.

Posted by Frank Cotolo at 8:59 PM No comments:

Time of the season

It's time for the countdown, the Breeders Crown Countdown, the exclusive blog that will coordinate with our harness blog at TwinSpires.com and the Hambletonian Society to find great wagering opportunities for "Crown" eligibles as they race their ways to the Crown finals.

The 2014 Breeders Crown will take place at the Meadowlands and be raced over two nights in November, with the divisional races divided into a four-race block of distaff races on Friday (Nov. 21) and the remaining eight finals races held Saturday (Nov. 22).

Tom Charters, president of The Hambletonian Society, which owns and administrates the series, is familiar with the demands of staging the event at rotating host tracks, as well as the Society’s flexibility in presenting the event.

“The Breeders Crown has been conducted in just about every format -- single races, blocks of races, all twelve races on one night -- and we try always to be sensitive to host track parameters while still getting the most 'bang' out of the event in regard to publicity, TV and promotions,” said Charters. “The Meadowlands has been home to many of harness racing’s most important events over the past thirty years. We look forward to the return of the Breeders Crown under Jeff Gural's management and especially look forward to the new facility."

The Meadowlands  has hosted 67 Breeders Crown races -- more than any other racetrack -- and in 2014 will celebrate 30 years of Breeders Crown history.

This season we will be watching the top horses in the divisions, a crew of talent that has been, mostly competitive.

There's Sweet Lou, the monstrous steed that has all the Free-For-All pacers anything but free to beat him. Sebastian K, the older trotter and former Horse of the Year in Sweden, who has dominated his division but will have to be supplemented if he is to go for a Crown win.

Hambletonian-winner Trixton and Jimmy Takter's other dynamos Father Patrick and Nuncio, may meet one another again as they head for the soph-colt Crown.

There are bound to be others, unusual suspects, if you will, that are having a better second half of the season than the first and readying to make noise against the season's popular names. And still others can buy into Crown races, as supplements.

Big stakes are still on the agenda in the months leading to November's end, so watch the TwinSpires harness blog and the link to this exclusive blog for special attention to races including Crown probables and great wagering promise.

The Breeders Crown series has crowned champions in every division for trotters and pacers and has been the deciding factor in Horse of the Year honors since 1984. More than $164 million in purse money has been disbursed over 346 events.
Posted by Frank Cotolo at 6:38 PM No comments: