Another ‘Derby’ for the stalwart sons of speed


The Canadian Pacing Derby is the end-of-summer stage for the hard-nosed older pacers. It debuted in 1936 and this year features last season’s 14-1 shock, Foiled Again and so many of the foes that continue to pound the North American harness track surface for the largest purses available to the division. The 2013 group is iron-clad speed and stamina, the four-year-olds as swift as their elders, and all of them aim for the October classic in Pennsylvania. The battle ensues Saturday, Aug. 31 at Mohawk Raceway.

Each field of these senior warriors must be analyzed from every angle, considering they are so evenly matched that only their peaking properties can give them an edge in any event.

This week, the edge the wagering public will support is the one earned last weekend at Mohawk by A Rocknroll Dance. In a stakes elim, he earned a speed badge with a stunning wire-to-wire 1:47.3 win. That is a record in both North America countries. Recency is so powerful to harness handicappers that one speedy performance will attract many players to A Rocknroll Dance this week but they are players that don’t  subscribe to the “bounce theory.”

Certainly, A Rocknroll Dance has improved off a slow start at four, which followed a slow second half of his soph season. But regardless of last week’s mile, he is facing the same tough group he has fallen to any number of times. As well, fans of Bolt The Duer finally got a great race out of him last week, though his unusual wire-to-wire mile brought up some track-bias concerns—few horses were able to close on fast front-pacing horses last Saturday. Bolt The Duer has been know to, when racing with his division last season and this, be at his best when he can come off a good cover trip while a leader fires all of the fractions.

So those two may have scorched the track last week but cases can be made for any of their foes in this $651,000 event filled with Breeders Crown hopefuls.

Sweet Lou has shown much more power at four than he did when mistakenly annointed champ status at three. He has been super with this group and can never be tossed out (he won for us at $19 this season, a reward we recognized due to his improvement).

Clear Vision raced super in his elim; he got second after an energy-draining start.

Foiled Again won last year at a shocking 14-1. He likes this track under any surface circumstances. There is a reason he is the richest standardbred ever and you can bet last week’s mile by A Rocknroll Dance doesn’t daunt him in the least.

Aracache Hanover takes good care of himself when a smooth trip comes his way. He also has speed and being a dual-trick pony helps him earn at this level.

Heston Blue Chip was the champ soph last season and he has faired well against the elders, though lately he seems intimidated. But he is strong and sound and has not yet completed his contribution to the division.

Pet Rock has proven himself royally this season. We thought he was better than the aforementioned soph champ last season but it was a tight crop of contenders and he needed to grow a bit. He has matured with finesse and cannot be ruled out.

Atochia is a veteran that goes far back with us, as we cashed in early on his elder career when he was startlingly supple at Yonkers. He has shocked some fields and is usually overlooked when among this ilk.

Dapper Dude may be the weakest in a strong field but has what it takes to belong among them. He is apt to come from behind like Bolt The Duer and pick up pieces when his cohorts get too snappy sharing the fractions.

Also eligible is Michael’s Power, who this season has shown little and is yet to take a true stance against this herd.

How you wager should be based on a subjective value odds line but be warned that such opinions could lead you to overlays that most likely will not include last week’s elim winners. This could be a good thing because Sweet Lou, Pet Rock and Foiled Again may meet your value standards and you will have a better chance than you think to take down last week’s so-called speedsters.

Posted by Frank Cotolo at 10:22 PM No comments:


Here they are again, unconvinced just which one will rule this season. The soph-colt trotters battle again, this time at Vernon on Aug. 25 in the $360,000 Dr. Harry M. Zweig Memorial.

Hambo-champ Royalty For Life is on the outside again, after dueling himself out of contention on the three turns of Pocono last week. It is better to suspect the same kind of duel, with Smilin Eli, will not develop here. Instead, perhaps we may count on some shuffling, all of which could give the best last strides to Aperfectyankee.

Corky will be on fire early and Pine Credit will look to become involved, along with Royalty For Life and Smilin Eli seeking position and perhaps taking and re-taking leads.

Last week, as Spider Blue Chip took advantage of the duel and shook loose late to win the Colonial, Aperfectyankee was flying but could only get fourth. Aperfectyankee, every bit as good as the classiest of this division, needs this kind of activity while in a good spot to fire. Post 2 may be the place. He certainly will be an overlay, as he continues to be among his ilk.

The $150,000 Zweig for the fillies is missing the best of the lot, Bee A Magician, so a tight battle may ensue. With Frau Blucher returning after some rest but getting the 9 hole and To Dream On also on the outside, this looks like another good chance for Mistery Woman to take flight. Look also for an aggressive Shared Past to become involved, she is  a danger to upset.

A $75,000 consolation for the colts features some unfamiliar names among the stakes group of this division. Perhaps another shocker is in the works with Hamdalla, from upset specialist trainer Riina Rekila. She exploded at Pocono last year with a relatively unknown and she drove. Here, she uses John Campbell and as the mystery factor may be worth a shot at a big price.

The $40,000 consolation for the fillies may be a simple romp for Miss Steele, who has been racing well against better and may fool the crowd into a big price considering her poor win record. The Millers will have her raring to go here, in a field that boasts few wins and bows to Miss Steele’s earnings this season.

Read the result stories at Hambletonian Society's Breeders Crown archive and get your account to bet at TwinSpires.

Posted by Frank Cotolo at 10:57 PM No comments:

Once again we launch The Breeders Crown Countdown, the official Hambletonian Society and TwinSpires bettors’ blog for stakes leading to the sport’s biggest nights of racing, the Breeders Crown elims and finals. This year marks the return of the series to Mohegan Sun at Pocono Downs.
All 12 event finals will be to be raced Saturday, Oct. 19, 2013. Eliminations for three-year-old-and-up events, as well as the two-year-old colt pace, if necessary will be raced Saturday, Oct.12, 2013. Eliminations for all other two-year-old events, if necessary go on Friday, Oct. 11, 2013. 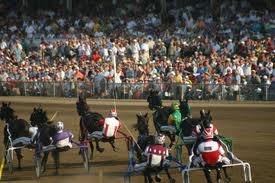 The estimated purses this years are:
Open Trot: $600,000
Mare Trot: $250,000
Open Pace: $500,000
Mare Pace: $300,000
2-year-olds: $600,000
3-year-olds: $500,000
This blog will offer valuable suggestions for wagering on all Breeders Crown (BC) eligibles competing in major events around North America (and sometimes Europe) leading to the elimination weekend. Other races involving possible participants (supplements, etcetera) are covered in the weekly TwinSpires harness blog.
Keep up with the top horses in the divisions racing to the big nights at the Breeders Crown Countdown and read archived result stories at Hambletonian Society and get an account at TwinSpires to keep up with all the great harness bets.
Top dogs
Every horse from this season that has a spot in the top-10 earning list so far is a BC eligible. However, only six of the 12 divisions are represented on that list. The stakes with top earners—even beyond the top-10 list—will be a focus of this blog and the total of events concerning eligibles will be shared with the TwinSpires harness blog.
The top-10 list, in order of earnings as of this post:
Captaintreacherous
Clearly one of the greatest pacers of all time, we have endorsed him to the benefit of bettors since the beginning of his super sophomore season.
Bee A Magician
We found this great filly trotter at two, when she paid the most and began her domination of the frosh division. She has come on at three to beat everything that moves.
Royalty For Life
The Hambletonian winner was one of our top picks in the April issue of Hoof Beats. Though he has not paid well enough to formally endorse at three, he is a major factor in his division.
I Luv The Nitelife
We continually try to beat this beautiful soph filly and have been less than successful. Once we began to key her in exotics we saw profits. She is a wickedly fast filly that can already be called her division’s top choice in the big series.
Foiled Again
A stalwart older pacer who became the biggest earner of all time, he continues to challenge veterans and new-to-the-division four-year-olds with tenacity. He is always a threat.
Corky
One of Jimmy Takter’s stream of trotters that shows enough talent to make this list without having won uber-major [sic] events. He has a lot to do to beat the likes of Royalty For Life and even Smilin Eli (who shows up as the 13th highest earner this year) but he may improve greatly as the temperatures tighten.
Pet Rock
We nabbed him at three, seeing a whole lot of talent and then he exploded at four and has been a patch of wildfire in every older pacing event.
Vegas Vacation
He made a lot of money so far but on the tail of Captaintreacherous. He is fast but not fast enough, he is aggressive but does not seem to overcome adversity like his main foe.
Anndrovette
We caught his older pacing gal every time the public backed off on her and cashed well. She still seeks the proper respect she should have for racing with force and ferocity.
Sunfire Blue Chip
Like the other glamour-boys pacers, this mid-season star has managed to do his best when Captaintreacherous is resting from one of his trounces of horses even better than this one. We don’t have a lot of confidence he will stay on this list for long.


Other big earners, like Sevruga (older trotter), Feeling You (mare pacer) and some already deserving freshmen, will be covered weekly on the partnering blogs.
Posted by Frank Cotolo at 9:58 AM No comments: