The Big ‘Dance’ Rocks The Cane

On Friday, Aug. 31, frosh-colt trotters battle for big money in the Champlain Stakes at Mohawk, part of the big Grand Circuit weekend (see TwinSpires blog for analysis of other major events).


The first split is worth $140,914, the kind of purse most of these youngsters hope to see again as their careers ensue.


Jim Oscarsson’s Aperfectyankee, who we gave you in the Peter Haughton and who won to become the 2013 Hambletonian future-book choice, is here and looking terrific; too good, in fact, to do anything but key in an exacta. There could be a decent return using Broadway Prince second. This developing youngster has good reason to be in this group and may be on his way to being a nemesis to the top choice into their soph seasons.


The next split for the same division is worth $138,915 and Cool Victory could be the upset contender at a price. Although he has some breaking issues, he has done well despite the jumps and is well bred enough to improve once those young quirks are handled. 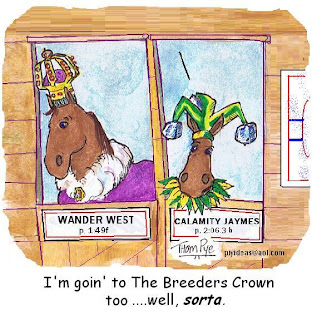 Sept. 1 at Mohawk delivers some of our glamour-boy trotting pals from the Hambletonian Trail (cartoon by Thom Pye).


Hometown favorite Knows Nothing, who we beat last week with Presdigitator, also in this field, will get plenty of support, leaving “Fox” with a fair price. His loss to Googoo Gaagaa and Market Share was mainly a loss to the latter, who got a better trip while Fox cut the fractions.


“Gaagaa” is not here and we feel Fox is much better than Knows Nothing on an even keel, so we should take advantage of the home-fans’ bias.


For top filly trotter Check Me Out, the soph-filly trot conclusion should be an afterthought. A pass is our choice.


Soph-filly pacers bring us back to Economy Terror for a comeback off of a dull effort last week. She should be raring to go against this tepid group.


More Hambo alumni from this season adorn the soph-colt trot final. My Mvp could continue to show great form now that his great form is winning him races. Frost Bites K may have some trouble from post 8 but demands attention in exotics.


Finally, the soph-colt pace is a hometown showcase for Sweet Lou. He is the champ of the state-bred’s division and doesn’t have much to go up against here for some easy money—for him, that is, because bettors will be offered nothing.
Keep up with the top horses in the divisions racing to the Crown at the Breeders Crown Countdown and read archived result stories at Hambletonian Society and get your account at TwinSpires to keep up with all the great harness bets.
Posted by Frank Cotolo at 8:58 PM No comments:

The Hambletonian field final has once again shown the strength of the participants in other events. The August classic is usually considered a “key race” when the entire field, regardless of where they finished at the New Meadowlands the first Saturday in August, goes on to show their muscle in other classy events.
Saturday, Aug. 25, Knows Nothing and Prestidigitator are the Hambo has-beens that are sparkling after the fact.
Knows Nothing returned big, with Prestidigitator right behind him, in the event that brings them both to the $130,000 Ontario Sires Stakes Gold Final at Mohawk.
We liked Prestidigitator in the Hambo and we liked him last week. The crowd will be all over Jody Jamieson and “Nothing,” so we like Prestidigitator to win here, slightly overlooked in lieu of Nothing.
Also on the Mohawk card, the top older pacers go at it to earn a place in next week’s Canadian Pacing Derby final but contesting in a single mile.
Betterthancheddar, the Breeders Crown soph-colt pace champion from last year, gets the 8 hole against some others interested in this year’s classic.

Allthergltrsisgold has been responsive in Canada and looks to make a mark to prove he has the stuff that makes Breeders Crown heroes. This year’s event could be the spot for him, certainly if he wins next week, but even here against We Will See, Bettor Sweet and the aforementioned Betterthancheddar. Certainly a good price is involved if he manages to take this and go on to the final.

For updated betting analysis on the Aug. 26 Cane Pace elim at Tioga and the 'Zweigs' for glamour-boy trotters at Vernon that same day, click here.
You can make your bets at TwinSpires and you can follow all of the result stories at the Hambletonian home page.
Posted by Frank Cotolo at 12:35 AM No comments:

Top earners look for big second half of season

As August hits midstream and the second half of the season gets underway, there is a lot of great wagering ahead for both sexes in both gaits of all the Breeders Crown divisions.


We will be covering many of those races, concentrating on the eligibles (horses can supplement to an event if their sires have been nominated; click here for stallion nomination list for 2012). Along with our TwinSpires harness blogs, the previews for the weekends and the news and notes on Mondays), suggested contenders in events will appear, featuring our usual slant on finding prices that defy the obvious.


Below is a list of the top money-earners in all divisions, as of Aug. 14. A “/ne” after the horse’s name means he must supplement to be involved this year. All others are eligible.


Oddly enough, the number-one earner in all divisions this year, Michaels Power, will have to hope for a great second half of the season so his connections could consider supplementing him.
This list offers no millionaires as of the date posted. On the precipice of a mil are the first two on the list, both sophomores. Three-year-olds stack the list, with 13 in the top 20; four in the top 10 are trotters, two of those sophomores, one of those a filly.
Grand Circuit events could dominate the paths to the “Crown” elims. Top horses and more eligibles that can earn big dollars in the next few months will be featured at the Illinois fairs, the Delaware, Ohio Little Brown Jug meet and The Red Mile’s hosting of lucrative stakes.
Check the current TwinSpires harness blog for some of the horse below racing Sunday, Aug. 19 and return here often for updates and insights as the Breeders Crown Countdown progresses.


Check the current TwinSpires harness blog for some of the horse below racing Sunday, Aug. 19 and return here often for updates and insights as the Breeders Crown Countdown progresses.

Posted by Frank Cotolo at 10:00 AM No comments:

Poised to start the clock

The countdown begins shortly. This blog will carry its annual evaluation of Breeders Crown probables in major events leading to the classic series. This year, all 12 events are to be raced at Woodbine Racetrace on Saturday, Oct. 27.

Eliminations for three-year-old-and-up events, if necessary, will be programmed for Saturday, Oct.20.

Eliminations for two-year-old events, if necessary, will be held Friday, Oct.19.

Posted by Frank Cotolo at 5:57 PM No comments: