Pacing mares in Milton at Mohawk

The older pacing mares division is a near-exclusive club by this time of the season. As a tight group of four-year-olds and up battle in only a handful of big events, the group also competes in opens and invites other weeks, each femme clawing her way to the Breeders Crown for the last big breath of glory this year (and for some of them the last competition they will endure before taking on the role of boordmare).


At Mohawk on Saturday, Sept. 22, some of the top mares in the division (the group was absent from all major affairs at the Delaware, Ohio meet last week) fight for pieces of the $384,000 purse of the Milton Final.


Morning-line favorite Put On A Show will leave from the rail and get a lot of wagering attention. But she will have to have some help from trip and luck to win this one.


The division hails no domineering femme and so it goes that the morning line is spread between the latest fiery dames.


Drop The Ball gets second-choice status on the line, with Anndrovette third and Rebeka Bayama fourth. 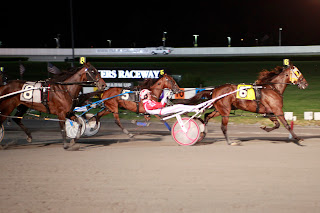 Though none of these proposed prices are unfair on any line, it does seem that gals like Krispy Apple and Rocklamation are especially high and will offer a lot.


Both of those mares finished third in their respective Milton elims but Krispy Apple appears to be the dangerously placed mare in this group. Her recent performances are flowing with excuses. She has been less productive at four racing against older mares but nonetheless she bears resemblance to the kind of upset property we like.


A good priced overlay, then, is in order.


Sept. 22’s New York Sires Stakes finals at Yonkers will host any number of Breeders Crown eligibles. We looked over the big races and found which eligibles we liked at a decent price.


The sophomore-filly pace final may interest you, as Ramalama gets another shot to beat the big choices. She is a guaranteed longshot going here and she has been showing enough spunk lately to have gotten into this final (she is only one for a dozen in the win column this year). Trainer Richie Silverman has had to deal with some tough competition in this division, most of which are here. With Jim Morrill, Jr. going from post 4 and a little luck on the half-mile she could pull this one off.


In the three-year-old colt trot, Archangel will be bet to the utmost last penny, leaving room for Coraggioso to go off at a decent price. He may get a slight edge since Archangel has to negotiate leaving from post 8, which can cost him a step or two at the end at Yonkers.


How to beat Heston Blue Chip in the soph-colt pace is a chore. But if Major Bombay stays in the race after failing only days before in the Little Brown Jug, he may be best from the rail, even if it is a hair or a nose.
Keep up with the top horses in the divisions racing to the Crown at the Breeders Crown Countdown and read archived result stories at Hambletonian Society and get your account at TwinSpires to keep up with all the great harness bets.
Posted by Frank Cotolo at 7:10 PM