Some of the season’s top trotters and pacers from divisions other than the two featured in the Jugette and Little Brown Jug battle for cash and prestige during the Delaware, Ohio meet’s biggest days of racing, Wednesday and Thursday, Sept. 19 and Sept. 20.


Earlier in the Jugette program on Sept. 19, soph-filly trotters go in two $51,000 divisions of the Buckette. The first division has eight relatively unknown division members, with a soft early choice, Oasis Dream.


We offer a shot with Miss Fidget, Ed Lohmeyer’s filly driven here by John Campbell. The filly’s last race was marred by a break but coming off of five races at five different tracks she was sent off in a classy state-bred at Yonkers at 7-2. We feel she will be dismissed by bettors while still deserving a shot in a field not swarming with talent, to say the least. 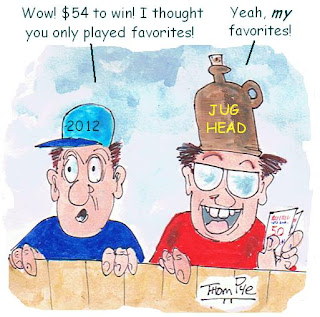 In Buckette two, the magnificent Maven may very well snap a track record with Yannick Gingras pumping her from start to finish. She appears to out-class this field by a mile, making it difficult to play against her to win. As a key, you may want to hook her up with Miss Chip K, who danced with the femme stars in the filly Zweig and was a close third.


On Sept. 20, soph-colt trotters charge in The Old Oaken Bucket. There are only eight colts here and none of them have seen their names on the marquee during main events for the division. So, the $125,800 purse should be making them and their connections drool.


The public choice will be Fusion Man, coming off of a major Kentucky state-bred final, his second win in a row at The Red Mile. Jeff Smith’s colt has done little wrong in eight races this season, though he has not taken on the best of the breed.


Frost Bites K, however, has been in the thick of the top colts this season and though he failed to get a berth in the Hambletonian he has readily taken on that group. His most recent win is at the Meadows where he was overlooked at 14-1. Post 7 in a field of eight could turn some people off, which is great for the win price.


Older trotting mares take the forefront in the $153,000 Ms Versatility Final. This thin division still has some kick to it, but at this point in the season, which ones are the outsiders?


Cedar Dove will probably indulge in driver Ron Pierce’s urging to get to the top early but a lot of people will be concerned considering the mare’s last two races. She quit in both, although last week she did have an excuse. Beatgoeson Hanover was awesome at Vernon, passing Cedar Dove. However, pulling off that trip on this oval is not so easy. As well, Action-Broadway was also in that mix, hanging badly to finish fifth.


The dangerous speed is Frenchfysnvinegar. Should she out-gun Cedar Dove to the top or be quick enough from post 7 to get a spot second, she will make a three-quarters move that will be filled with trot from saving ground. That is the scenario to follow considering most bettors will dismiss this speedy seven-year-old.


Keep up with the top horses in the divisions racing to the Crown at the Breeders Crown Countdown and read archived result stories at Hambletonian Society and get your account at TwinSpires to keep up with all the great harness bets.
Cartoon by Thom Pye