The Grand Circuit concludes at Mohawk with three big affairs. There is a pair of Champlain Stakes for frosh pacers of both sexes and a Simcoe Stakes soph-colt pace.


The $252,521 Simcoe Stakes brings together a few stars and a few new faces from the glamour-boy pacer division. All in all there are a dozen going behind the gate.


It may be a giant task for our hero, A Rocknroll Dance, to handle the traffic while leaving from post 12. Although it is the second tier he will be instantly trapped and challenged as the wave of speedballs before him take flight early. As well, Michaels Power will shave fractions to look for a good spot, if not the front, early.


Even if the speed divides itself differently, this looks like a mile that can be won handily from the mid pack with a move as late as midway through the journey. We see it as an event rife for an upset. This is why for the first time since we nabbed Simply Business as a longshot (in last year’s Metro Stakes), we are going to back him here. He is the classiest of the top seven as they line up and Ron Pierce will drive with his usual relentless dismissal of traffic. 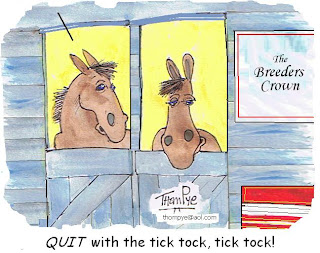 The first of the two Champlains is for frosh-filly pacers and is worth $226,763. Hot-streaker I Luv The Nitelife is here, from post 11, and will get a load of dough to win.


Parlee Beach has had two disappointing outings with excuses. We feel Bob McIntosh’s student, a daughter of Somebeachsomewhere, is yet to give us a profile of her power. She may do that here and do it without the public support she has received in her last few outings. The public is fickle and with the likes of what she is up against here we feel the public could abandon her just as she peaks to a big price win.


The colt pace is worth $261,829 and presents some Metro Pace co-stars bound to be bet upon heavily. Many people felt Odds On Equuleus may have won the Metro Pace but for a few steps missed in a late charge. Apprentice Hanover comes from tier two here but will still get a lot of support after his buoyant Metro Pace performance.


This leaves us with a suggested outside contender, Rockin Amadeus. No one expected his gutsy move in the Metro Pace, which assisted in the performances of the aforementioned as they went after Captaintreacherous.


Rockin Amadeus’ rocket move from post 7, getting firmly to the lead at 30-1, prompted Vegas Vacation to make a strenuous move to take the lead over. Then, “Amadeus” was trapped behind dead duelers as Johny Rock went nose to nose with “Vegas.”


There was no room to use whatever Amadeus has left in the stretch as the duelers backed up and the big guns closed but we made notice of that trip and under the circumstances in this field, like the chances of a Rockin Amadeus upset.


Keep up with the top horses in the divisions racing to the Crown at the Breeders Crown Countdown and read archived result stories at Hambletonian Society and get your account at TwinSpires to keep up with all the great harness bets.
Posted by Frank Cotolo at 10:31 PM