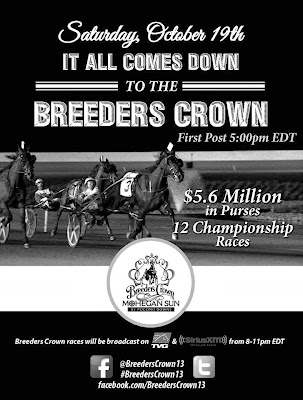 This Friday, Oct. 11, at Pocono Downs the Breeders Crown elims for frosh filly trotters and frosh filly pacers each have a pair of divisions presented, as well as a single mile for the frosh colt trotters. In the multi-divisions the top four finishers return for the Oct. 19 finals, while the single heat offers the top seven a shot at the two byes.

The colt trotters will battle to meet Credit Fashion and Don Dorado in the final and Father Patrick, undeniable division leader, leads them. He makes his start from post 9 and may have only one serious contender in the returning-to-action Nuncio, who has chased him in major affairs over the summer. These two could explain the exacta, with a topple of “Patrick” if Nuncio has gotten a bit sharper and gets a step or two advantage here.

Next is a shot at another outsider, Demanding Sam. She is in from Canada and a Champlain winner there, coming from this circuit where she raced well against similar. She won’t win off the top but she will be close enough to shimmy up the open stretch if they get winded from fast early fractions, which looks the case.

The first filly pacer elim features a gal that may be headed for sophomore stardom. Ali Blue is a game youngster, making mature moves with an ability to quickly fix a mistake. She may be a good price here, getting post 7 and being on the outside of some others that will attract a few bucks.

The last of the filly double elim package should be an easy spin for Precocious Beauty. She gets the inside and has no reason not to win her eighth of nine starts. She has not been beaten since August.

I Luv The Nitelife, the undisputed soph- filly pacing leader, will start from post 7 in her division’s final; Somwherovrarainbow leaves from post eight. Shebestingin, who on paced the fastest mile in history by a female pacer when she won a division of the Glen Garnsey Memorial in 1:47 at The Red Mile, drew post 5.
The frosh filly trotters start off with a division that may spark a few opinions on which gal is best. We like the chances of Goddess, who won a Kindergarten Stakes easily from the outside three back and lost her next two with a few excuses. She will be the outside contender and worth the price we expect.