Stalwart seniors tough it out in four finals

This Saturday at Pocono Downs the Breeders Crown the older sets co-star in the dozen finals for the 2013 championship program. The main TwinSpires harness blog brings you here for the analysis of this quartet. Here are the fields, along with comments for each horse, followed by our two suggested top contenders not necessarily in order of preference.


$250,000 Mares Open Trot
Post - Horse
1 – Maven – She is the obvious public choice and has done best in her division all year.
2 - Check Me Out – Last season Maven could not keep up with this gorgeous gal. This season things have reversed, except her elim was a sign of maturity she hasn’t shown while trying to make her four-year-old season a success.
3 - Bax Of Life – She just cannot beat these under the usual circumstances and probably won’t tonight, either.
4 – Unefoisdanmavie – Her elim was super. She was second over, made up plenty of ground and closed to beat two inside of her.
5 – Dorsay – Her breaking issues were gone in the elim but she was short and that is disturbing.
6 - Real Babe – A suck-a-long type that should not cause much trouble.
7 - Beatgoeson Hanover – This one needs a trip and a speed duel in front, neither likely to accommodate her here.
8 - Cedar Dove – Few scenarios offer evidence she will win.
9 - Cowgirl Hall – She had promise but her elim was flat.
AE1 - Win Missy B – She showed a ton of speed coming back from a layoff, needed that race and could be considered but she most likely will not get into the race.
AE2 - Mystical Starlight – It would be luck to get into the race and she would need a lot more to win it.

Check Me Out; Unefoisdansmavie; Maven 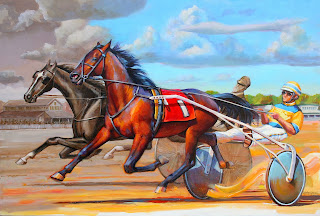 $500,000 Open Pace
Post - Horse
1 - Clear Vision – He has gotten better as the season waned but won’t be the best in time to win this.
2 - Foiled Again – He won the elim strongly but his in-and-out form this season makes him vulnerable.
3 - Golden Receiver – He never regained the power he had at the beginning of the season and did not impress us in his elim but he has a history of surprising wake-up miles.
4 - Modern Legend – This guy could be peaking at the right time. He raced a tougher trip than the winner last week, passing three while closing to be best of the rest.
5 - Pet Rock – He is always in it and with the week off (from his bye) he could be the strongest when the smoke has cleared.
6 - Warrawee Needy – At best he was a contender all year and never a strong threat. One great race does not a season make, so to speak.
7 - Michaels Power – Why is he even in this race? He was never a first-notch contender.
8 - Bolt The Duer – He will strike when opportunity knocks and some other horse does all the work through the mile. That scenario will not present itself here.
9 - Sweet Lou – He fights and can win either way but it looks like he will be in traffic and that won’t do his talent any justice.
AE1 - Bettors Edge – There is little chance he will be in it and then he will have to rely on a speed duel to close.
AE2 - A Rocknroll Dance – What the hell happened to him last week? He may have emptied his tank of comeback fuel that got him back into the divisional picture late. 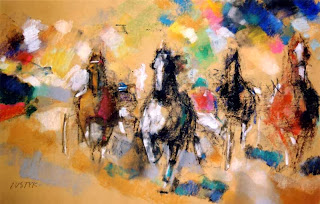 $300,000 Open Mares Pace
Post - Horse
1 – Rocklamation – We have been with her for all of her high-paying wins but we don’t feel this will be one of them.
2 – Anndrovette – She won off of a great trip and was one of the rare horses to close on the inside she but may not get such a journey this week.
3 - Economy Terror – She has been dull all season and was no bargain in the elim.
4 - Swinging Beauty – We liked her in the elim but she couldn’t get going in a great spot behind a duel so she seems no threat.
5 - Monkey On My Wheel – She was just nabbed by Anndrovette and deserves the call to be a few steps better than the others now. She was improving every week since coming back into action and may be looking at a strong winter campaign.
6 - Feeling You – She may be involved because she is good and you can toss out her elim but we don’t think she will win it.
7 – Shelliscape – There was never any real threat from her in this division.
8 – Camille – Her season appears over already, she makes no noise when the going is silent.
9 - Drop The Ball – She will get some action but may have to work too hard for her own good from this post.
AE1 - Krispy Apple – There is no worry she will upset if she gets in it.
AE2 - Ooh Bad Shark – This one has no bite, if you will excuse the pun.

$600,000 Open Trot
Post - Horse
1 - Market Share – It looked early like the 2012 Hambo winner was going to dominate but it was a rash forecast. We don’t feel he is seasoned enough yet.
2 - Wishing Stone – This guy is always a threat and has beaten them all more than once.
3 - My MVP – There seems no argument that he would perform his best here and topple the likes of this group.
4 – Guccio – Perhaps next year he will be a dynamo but that scourge will probably not begin in this race.
5 – Intimidate – He appears ready to try another late-season stroll in the limelight but we think he is over his head.
6 - Mister Herbie – Can we ever toss out this monstrous guy who, though inconsistent as a winner, always finds a way to be in it.
7 - Arch Madness – The Red Mile rumbled from his performances and he has his favorite driver-trainer at the throttle. We expect a very big mile.
8 - Uncle Peter – The strength at the end of the mile will be with him and the 7 horse because they are simply in the best shape of the lot coming into this event.
9 – Sevruga – He may not care to be wide for two turns and once he puts in gear that is what he may have to tolerate to win.

The Breeders Crown Countdown blog and the TwinSpires harness blog have presented this exclusive look at great betting races that included eligibles weekly. The archived reports on the results at the Hambletonian Society web site.